Tenable deprecated target groups in Tenable.io on February 4th, 2022. Tenable recommends that customers use tags instead to group and scan assets in Tenable.io.

If possible, you should scan entire class C subnets and filter the dataset since simplicity is better than complexity when operating a vulnerability management program. However, this article assumes you are restricted to using lists of single IP addresses and smaller subnets.

The diagram below illustrates the complete process. 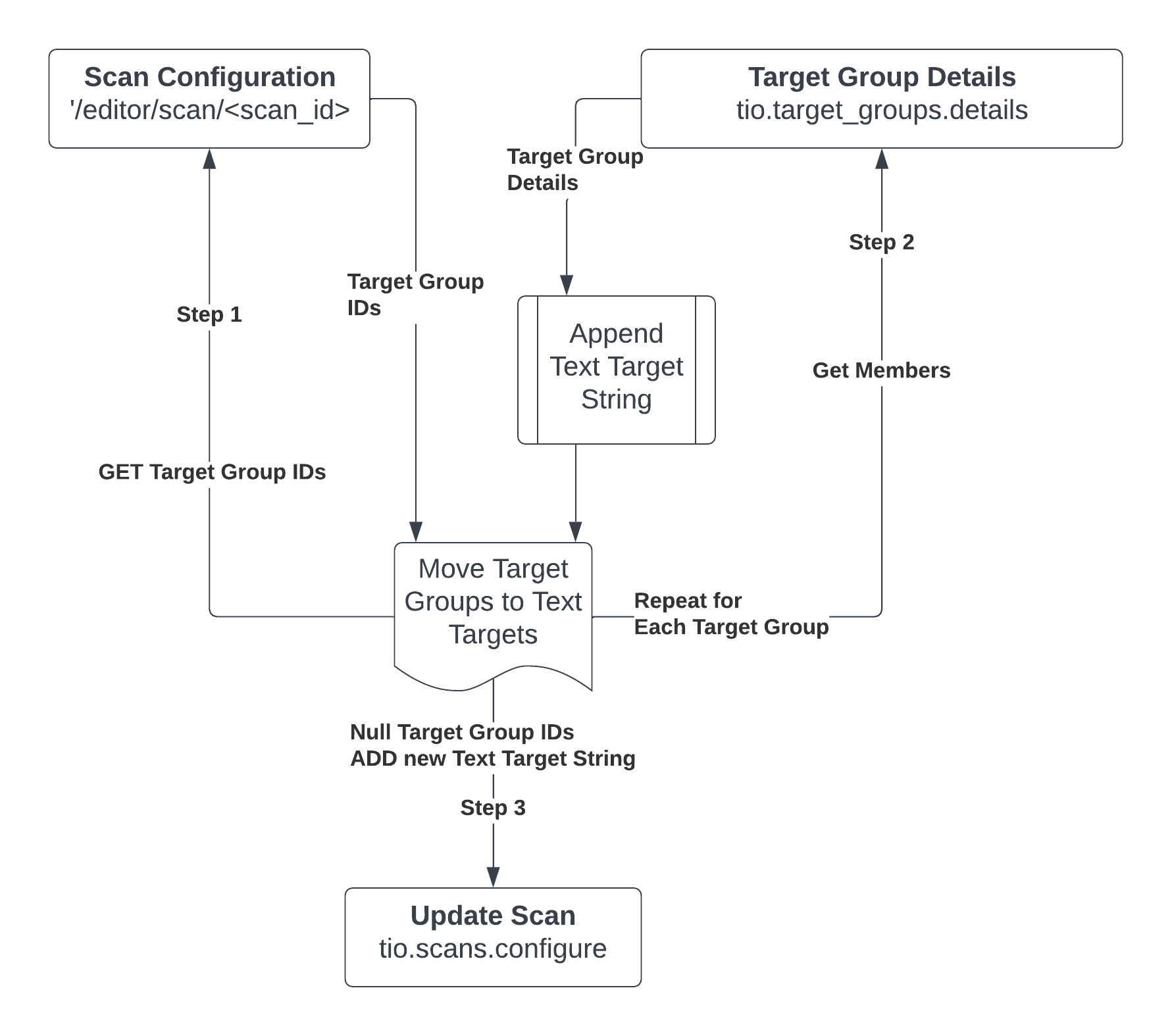 The script that we create in this article will accept a single scan ID since iterating over every scan in a Tenable.io instance is inefficient. However, you can add a for loop to handle more than one scan ID if you choose.

Find IDs for Target Groups Assigned to a Scan

First we need obtain the IDs for the target groups that are configured for a particular scan. To begin, we can define a function called get_target_group_ids_from_a_scan that expects a scan ID.

The Tenable.io scans API does not return the target groups associated with scans so we can't use the pyTenable function tio.scans.details(<scan_id>) to retrieve the target group IDs. Instead we need to make a raw API call to the GET /editor/scan/{scan_id} endpoint.

Note that scan_id was cast as a string using str() since pyTenable expects a string and the scan_id is an integer.

We can pause here to check our progress. I always find it helpful to print out responses as I progress when developing automation with python. We can use the pprint library to print out the JSON response and study the structure.

The response is quite verbose since it contains every option available for the scan configuration. The items we're interested in are the objects under settings.basic.inputs. The inputs object contains an array of objects containing input data relating to the basic settings for the scan. One of these inputs will contain the target group IDs associated with the scan. We can use a for loop and an if statement to grab the list of target group IDs and print it for confirmation. The for loop will iterate over the inputs objects looking for an input with the name Target Groups. When the target groups input is found we can print the values for the default key which contains the IDs for the target groups associated with the specified scan.

The code above will print out a list of all target group IDs for target groups associated with the specified scan. After printing out the response for testing, we can finish off our function by replacing the print statement with a return statement instead as shown below.

Now that we have a way to retrieve the target group IDs for a scan, we need to grab the members (IPs and subnets) for each target group and combine them into a comma-separated string. We can call this function get_target_group_members. It will accept the target group ID list returned by the previous function. Then, in the function, we can begin our text_target_string as shown below:

Since there might be more than one target group in the list, we can wrap the code above in a for loop and ensure that each member is appended to the text_target_string variable using python's += operator. Note the [1:] appended to the text_target_string variable in the return statement; this [1:] tells python to omit the first character of the string. This is necessary since we start the string with a comma to support the append operation when building the comma-separated list of members.

Alright, we're are almost to the finish line!

Our next step is to add the target group members (IPs and subnets) we retrieved in the previous step to our scan target text list. Then we need to clear the existing target groups by setting the target group list to []. Luckily, pyTenable makes it very easy to update these items in our scan. All we need is the scan_id, target_groups set to [], and our newly minted text_target_string containing the comma-separated list of members.

Lastly, we can use our two functions together to complete the migration. While this could be a single line of code, we break it down into two lines for readability. The first line retrieves our text target string and the second line update the scan. For the purposes of this example, I'm using a scan ID of 5647.

Finally, we've arrived at the finish line! The full code sample to migrate target groups to text targets for a specified scan using pyTenable is illustrated below:

Replace scan ID 5467 in the code sample above with the scan ID you wish to perform the target group to text target migration on.

If you are not a developer and the pyTenable example above was overwhelming, you can accomplish the same task with Navi. After downloading and installing Navi via Python's package manager (pip), you can migrate target groups to scan text targets with two commands:

For more information about Navi, see the Navi GitHub wiki.